In 2002, just after graduating from high school in Laramie, WY, a young man named Kyle W. Burns joined the Marine Corps. Understandably, given the events of 9/11 and all that had transpired in the months since then, his mother Jocelyn tried to talk him out of it. However, he prevailed and reported for basic training at San Diego’s Marine Corps Recruit Depot. 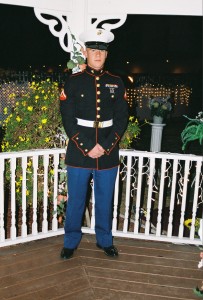 The Marine Corps was a good fit for a young man who was a thrill seeker, adventurer, and practical joker. His cousin Trish remembers those adventures quite well:

We, along with our other cousins would spend summers with our grandparents in Buffalo, WY. We had the time of our lives. Every summer consisted of fireworks and shooting guns. We’d kill anything that crossed our paths whether it was rocks, plants, trees, or animals. Grandma would give us $100 to buy whatever fireworks we wanted. Let me tell you, those fireworks weren’t just for show! Anthills and milkweed plants were blown up, and cows were sent scrambling away from bottle rocket barrages. But the very best was making water bombs in the horse troughs! Yes, most of those activities ended with things destroyed and long drawn-out lectures at the end of the day – but Kyle never minded and always thought up something new the next day.

In fact, one of his not so bright ideas involved fire. Kyle loved campfires, the bigger the better. One day, after a huge mound of cotton had built up against the garage from the cottonwood trees, Kyle decided to set it on fire. And boy did it start on fire! While Kyle, without any fear whatsoever, was trying to rake the fire down. Meanwhile our grandmother wisely called the fire department to assist in putting out the fire. To this day, I still have no idea how we managed to stay out of the ER during those summers, but we did.

Kyle loved rock climbing, fishing, camping, and caving. He was a huge sports fan who loved hockey, ran track and played soccer and baseball in high school. As a matter of fact, he was such a sports fan that friends would tell you he’d be the one outside when it was 40 below zero with letters painted on his chest.

Once Kyle’s basic training was completed, he went on to LAV (light armored vehicle) training at Camp Pendleton. Kyle’s first deployment was in March of 2003. He was assigned to an LAV company upon arrival in Kuwait and ultimately was part of the invasion into Iraq later that month. 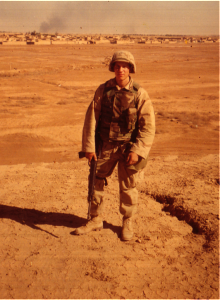 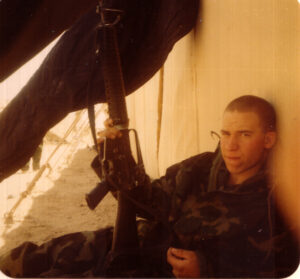 Kyle deployed for the second time in 2004. At that time, he was assigned to 1st Light Armored Reconnaissance Battalion, 1st Marine Division, I Marine Expeditionary Force, Camp Pendleton, California. His company was point for the invasion of Fallujah in November 2004. On November 11, 2004, Veterans Day, Kyle was struck and killed by an RPG (rocket propelled grenade). He was just short of the rank of corporal at the time, and was posthumously promoted. He saved lives that day:

Dustin Barker of Midland, Texas, who served with Kyle in Iraq, was with him Nov. 11. He said Kyle drew fire away from him and the other Marines on the ground.
“I feel 100 percent that he gave his life for our freedom,” Dustin said. “He saved my life on that day.”

On November 17, 2004, Senator Craig Thomas (R-WY) spoke of Kyle from the floor of the United States Senate:

It is because of people such as Kyle Burns that we continue to live safe and free. America’s men and women who answer the call of service and wear our Nation’s uniform deserve respect and recognition for the enormous burden that they willingly bear. Our people put everything on the line everyday, and because of these folks, our Nation remains free and strong in the face of danger.

The motto of the Marine Corps is “Semper Fidelis.” It means “Always Faithful.” Through his selfless and courageous sacrifice, LCpl Kyle Burns lived up to these words with great honor.

Lance Corporal Burns is survived by his mother Jo, his father Bob, his brother Kris, and his brothers of the United States Marine Corps. We say goodbye to a son, a brother, a Marine, and an American. Our Nation pays its deepest respect to LCpl Kyle Burns for his courage, his love of country, and his sacrifice so that we may remain free. He was a
hero in life, and he remains a hero in death. All of Wyoming and, indeed, the entire Nation are proud of him.
So, one Marine to another, Lance Corporal Burns, Semper Fi.

Kyle wanted to be the best of the best, and he lived life to the fullest with no regrets. He had no fear, loved the Corps and especially the big guns, and blowing things up. He was considering staying with the Corps when it came time for reenlistment. As he told his mother,

Integrity Ballistics is honored to name our Burns 1401 Less Lethal “Pancake” round in remembrance of a soldier, a son, a brother, a cousin, a Marine, an American Hero.

Today, May 25, 2015 – Memorial Day, we remember and honor Lance Corporal Kyle W. Burns for his service and for his sacrifice. We do not forget and we are eternally thankful for men such as he.